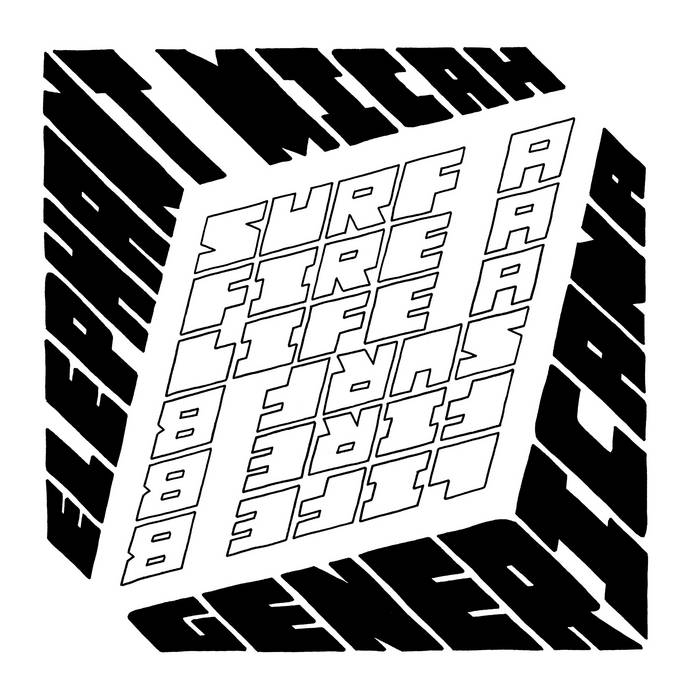 “Hey, Clayton, check out this flier I found with an alien face on it.”

“Yeah.  It says it’s at the old National Guard Armory in Ellettsville.”

It’s 3:00 AM in America.  That’s the hour when devotees of the underground dance party must answer an eternal question.  Is it time to chill out?

On Genericana, art folk stalwarts Elephant Micah butt in with a resounding “yes”—and “no.”

At first, the call to chill out seems obvious.  The album’s opening moments advertise a virtual vacation place, where soft waves of AM static crash and synthetic gulls call to a hazy sun.  A skeleton-thin drum loop jogs by--but these lazy synth tones are just working on their tan.
And then, just as the soundscape approaches maximum repose, a gnarly guitar band busts into the mix like an odd choice by a half-baked algorithm.

Indeed, “what” is the mantra of our moment.  And Genericana aspires to be that moment’s soundtrack.

“WHAT is happening to our culture?” Americans ask themselves, in the era that sees entertainment, politics, and community life consolidated in a digital communications ecosystem.  Responding, Elephant Micah has tuned its music to an appropriately disorienting pitch.  For songwriter and recordist Joe O’Connell, that means remixing his own cultural experience, and questioning how “where we live” affects “what we sound like”:

“To me, ‘country’ music could mean any of the music we listened to growing up.  When my sister and I were teenagers, in the 1990s, we put a lot of effort into trying to access alternative music.  You had to steal Rolling Stone issues from the public library to find out about artists.  Or stay up late when you could get in some different radio stations than you could during the day.  I think of that whole experience as a ‘country’ music experience.”

In the place of “Americana,” the band offers Genericana.  Evoking genealogy, genre, generic brands (and perhaps a bottled genie), the album title points the way to a different theory of what binds our culture together.

“I think Genericana just means ‘the stuff from which stuff generates,’” O’Connell explains.  “It's a short hand way of shouting out to the stock elements that I'm mashing up in this music.  I wanted this project to be sort of like a lucky mutation, that could lead to a heartier version of Elephant Micah for the digital world.”

Mining the aesthetics of the average compact disc collection, Elephant Micah makes room on Genericana to play with sounds for their own sake.  O’Connell and company follow in the footsteps of songwriter-producers like Arthur Russell and John Martyn—artists whose descent into effects made their voices all the more poignant and personal.  Frequently, Genericana also pays tribute to laid back club sounds, from dub to ambient techno--and to the resourcefulness of the producers who invented these genres.

“To make this record, we assembled a bunch of gear that was devalued or discarded,” O’Connell explains.  “A cheap FM synth, some Hindustani electronics, and an old three-head tape deck to use as a ‘poor man’s Space echo.’”

At the top of this heap of equipment was something new.  And in fact, there had never been anything quite like it before.  Working from a series of manic band meetings and napkin drawings, percussionist and keyboardist Matt O’Connell brought to fruition a one-of-a-kind digital synthesizer.  Its inspiration comes from the possibility of alternative playing interfaces—ways of interacting with digital instruments that aren’t based on techniques for existing instruments.  Matt and Joe named this synth The Mutant, a title that’s right in key with the themes of Genericana.